by The Academy of Special Needs Planners | Mar 18, 2021 | Uncategorized 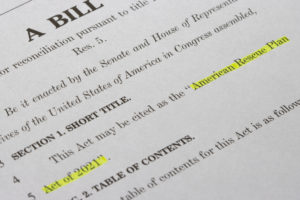 In stark contrast to previous COVID-19 relief bills, the $1.9 trillion American Rescue Plan, signed into law by President Biden on March 11, 2021, contains numerous provisions specifically aimed at supporting people with disabilities, especially those living at home with their parents or in need of in-home services.

Under the pandemic relief bill, people with incomes of less than $75,000 ($150,000 for couples who file taxes jointly) are entitled to $1,400 relief checks, as well as an additional $1,400 per dependent living in the household. Unlike the two prior COVID-19 relief bills, which provided additional relief checks only to children claimed as dependents, this bill also gives payments to adults claimed as dependents (primarily people with disabilities and others unable to live independently).

Another significant change is that the American Rescue Plan includes substantial new funding for Medicaid-supported home and community based services, the federal government’s primary program of in-home services and supportive housing options for people with disabilities. The pandemic has been particularly devastating to people with disabilities living in congregate settings, and many community programs were forced to shut down.  As COVID-19 spread over the past year, no federal aid was allocated to expand access to Medicaid’s community-based services. The relief bill boosts the federal government’s share of the program’s funding by 10 percent, which will translate into an additional $12.67 billion for state Medicaid programs in the next year, reopening community-based programs that closed due to the pandemic or shortening waiting lists for existing programs.

“During this pandemic, the disability community has suffered a huge loss of life and tragically high rates of COVID-19 infection. Many people with disabilities who lack access to critical home- and community-based services have been relegated to institutions and group care settings where the virus has spread rapidly, and they’ve been exposed to dangerous outbreaks,” said  Sen. Patty Murray (D-Wash.), as quoted by Disability Scoop. “None of this is acceptable, which is why the American Rescue Plan provides resources for home- and community-based services and supports the workforce that provides this important care.”

“After almost a full year of leaving the most urgent needs of people with intellectual and developmental disabilities out of relief legislation, Members of Congress are finally providing the resources necessary for people with disabilities to live safely, in the community, with the support they need,” Peter Berns, chief executive officer of The Arc, said in a news release. “This funding is desperately needed by the systems, providers and workforce that support people with disabilities.”

The American Rescue Plan passed on a party line vote in the Senate, with Vice President Kamala Harris casting the deciding the vote. In the House of Representatives, the final vote was 220 to 211.