by The Academy of Special Needs Planners | May 11, 2021 | Uncategorized

The Supreme Court of Kansas reformed the terms of an irrevocable trust to conform to the settlor’s intent when intent proved by clear and convincing evidence.

Facts:
In 2003, Jill Petrie St. Clair executed a trust agreement establishing her husband, William Paxson St. Claire, as a life beneficiary of the trust income. Upon William’s death, the trust income would then be distributed to Jill’s and William’s children and grandchildren, and the principal eventually would be distributed to the grandchildren. In 2002, before Jill created her trust, William established his own trust with an identical distribution scheme but naming Jill as a lifetime beneficiary of the trust’s income. Both Jill and William funded their trusts in identical amounts when Jill executed her trust agreement.

One of the purposes of William’s trust was to make sure the assets in his trust were not included in his or Jill’s taxable estates. M. Wayne Davidson, the attorney who prepared the trusts for Jill and William, proposed to Jill that she create her own trust to obtain gift tax benefits and to similarly assure that the assets in her trust were not included in William’s taxable estate. Jill’s trust agreement provided that “no part of this Trust shall be included in the Grantor’s gross estate for death tax purposes.” At the time Jill executed the trust agreement, she believed it contained the necessary provisions for the trust assets to be excluded from her and William’s taxable estates, and for the transfers to the trust to be considered completed gifts.

Because of a drafting error, Davidson failed to include two provisions in Jill’s trust to avoid the two trusts being considered reciprocal, resulting in the assets of Jill’s trusts being included in William’s estate and vice versa. Davidson omitted William’s ability to withdraw $5,000 or 5 percent of the trust assets. In addition, Davidson failed to give William a lifetime special power of appointment.

Because of the common distribution scheme, the trusts could be considered reciprocal.

Law:
“The court may reform the terms of a trust, even if unambiguous, to conform the terms to the settlor’s intention if it is proved by clear and convincing evidence that both the settlor’s intent and the terms of the trust were affected by a mistake of fact or law, whether in expression or inducement.” K.S.A. 58a-415. In In re Harris Testamentary Trust, 275 Kan. at 957, the court approved the reformation of a testamentary trust under K.S.A. 58a-415 to shield the trust corpus from being included in the taxable estate of the settlor’s son, the trustee, when the facts showed (1) the settlor intended to exclude the trust assets from his own and his heirs’ estates, (2) the trust terms as drafted contained a mistake, and (3) the party seeking the reformation demonstrated a need under existing tax law for the proposed reforms.

Holding:
The Supreme Court of Kansas stated that Jill and the trustee demonstrated by clear and convincing evidence that Jill’s intent in executing and funding the trust, and the terms of the trust itself, were both affected by a mistake of fact or law, making it necessary to reform the trust in order to conform to her true intent. The Supreme Court of Kansas added that absent reformation, the reciprocal trust doctrine would likely apply, which would destroy the economic symmetry of the two trusts.

The Supreme Court of Kansas held that reformation was necessary for the trust to be consistent with Jill’s original intent and to correct the scrivener’s error in excluding the two trust provisions. Accordingly, the district court did not err in reforming Jill’s trust. 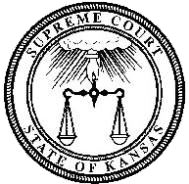