by The Academy of Special Needs Planners | Apr 22, 2021 | Uncategorized 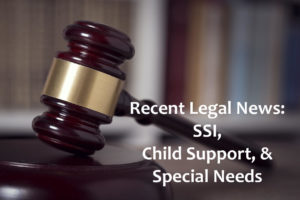 Recently, an Alabama appeals court denies father’s request to decrease his child support obligation due to his disabled adult son’s receipt of SSI benefits and, instead, increases the father’s child support payment to a special needs trust to pay for his son’s respite care. Wright v Wright-White (Ala.  Civ. App., Nos. 2190669 and 2190707, March 26, 2021).

In 2004, Tommie and Patricia Wright-White were divorced by a judgment that ordered Mr. Wright to pay $1,300 per month in child support to a special needs trust (SNT) created for the benefit of their son, Thomas, who had spastic quadriplegia and could not walk or talk. The judgment provided that the payments were to continue after Thomas attained the age of majority. In addition, the judgment awarded Mr. Wright weekend visitation with Thomas to afford Ms. Wright-White temporary respite from her care responsibilities. In 2009, Mr. Wright moved to Tennessee and stopped visiting Thomas regularly, forcing Ms. Wright-White to arrange for alternative respite care.

In 2017, Mr. Wright filed a petition for modification seeking to reduce his child support obligation because Thomas had begun receiving Supplemental Security Income (SSI) benefits. In 2019, Ms. Wright-White filed a petition for modification seeking the cost of respite care. In 2020, the matter was tried. At the time of the trial, Thomas was 26 years old and the SNT held approximately $375,000. The court granted Ms. Wright-White’s request for an increase in child support, although Mr. Wright’s post-judgment motion on attorney’s fees was granted in part. Both parties appealed.

The Alabama Court of Civil Appeals affirms the lower court’s judgment.  The court disagrees with Mr. Wright’s argument that Thomas had sufficient resources available, including SSI benefits and the SNT, to pay for his own respite care, and that Ms. Wright-White should contribute to the cost of respite care. The court holds that SSI benefits cannot be considered as a financial resource for a child to be credited against a parent’s child support obligation. Further, Ms. Wright-White, the primary trustee of the SNT, was trying to stretch the trust funds so that they would last the entirety of Thomas’ life. Given the purpose of the SNT and Ms. Wright-White’s discretion over distributions, the court holds that the trial court’s failing to order Ms. Wright-White to diminish the SNT’s funds to pay for respite care was not error.  The court also affirms the vacating of Ms. Wright-White’s attorney’s fee award.