Stetson 2020: The Good, the Bad and the Unknown of Using ABLE Accounts

by The Academy of Special Needs Planners | Nov 13, 2020 | Uncategorized

The following article is from a presentation given at Stetson Law’s 2020 National Conference on Special Needs Planning and Special Needs Trusts, which took place virtually via Zoom October 9-16. 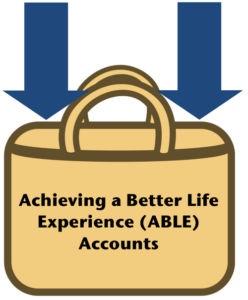 More than five years on, savings accounts authorized by The Stephen Beck, Jr., Achieving a Better Life Experience (ABLE) Act have proven a great, if underutilized, boon for people living with a disability.  At a session of the 22nd Annual Stetson National Conference, attorneys Stephen W. Dale of California and  Bradley J. Frigon of Colorado teamed with Peter J. Wall, Director of Fiduciary Services at True Link Financial, to unpack ABLE accounts’ promise and pitfalls for clients and their representatives.

Patterned on Section 529 college savings accounts, ABLE accounts offer a tax-advantaged way for people with disabilities to put money aside in excess of the Supplemental Security Income (SSI) program’s $2,000 resource cap without compromising their eligibility for government benefits like SSI and Medicaid. And, unlike a special needs trust, an ABLE account can be managed and controlled by the beneficiary.  In their materials, the presenters state that ABLE accounts “have become an incredible option not only as savings vehicles but also as a way to empower and promote independence for people with disabilities.”

One of ABLE’s major limitations, however, is the “age 26” rule: under current law, for an individual to be eligible for an account, the onset of their disability must have occurred prior to age 26.  Dale said it is “amazing” how many people don’t qualify because they became disabled after age 26.  But this limitation does not mean that a beneficiary must have been receiving SSI prior to age 26.  In such cases, a doctor simply needs to certify that the disability began before age 26, and the state doesn’t need a copy of the certification.  Because ABLE accounts are ultimately administered not by the Social Security Administration but by the Internal Revenue Service (IRS), it is “an entirely different game,” Dale noted.

The IRS regulations state that a contribution to an ABLE account can be made by any “person,” which includes a trust.  For this reason, more and more beneficiaries are setting up both ABLE accounts and special needs trusts (SNTs), according to Dale.

However, the presenters cautioned that in their experience many large corporate fiduciaries are wary of using ABLE accounts in conjunction with SNTs because it’s converting the nature of funds within the trust.  They are afraid of being accused of violating settlor intent by losing discretionary control of funds and opening themselves up to potential litigation.  The presenters recommend that trust drafters include transfer to an ABLE account in the trust documents.  “I’m putting it in every document I possibly can so you don’t run across that issue,” Frigon said.How Are ABLE Funds Being Used?

ABLE accounts are a good complement to an SNT because new data shows that ABLE accounts — which may contain only up to $100,000 without affecting SSI eligibility — are generally not being used as the savings vehicles they were intended to be.  Instead, beneficiaries are using them more as checking accounts.  The average ABLE account balance is only $5,000, the presenters reported.

Funds in an account instantly become the property of the beneficiary, and they can be spent on any “qualified disability expense” (QDEs) without an in-kind support and maintenance (ISM) reduction of SSI benefits.   QDEs are broadly defined and can include food (see POMS SI 01130.740.B.9).

Wall announced that for the first time we have data on how ABLE account funds are being spent.  True Link Financial, which will become a program provider for Ohio’s ABLE program, STABLE, reviewed the program’s transactions through January 16, 2020. Restaurant meals are the most popular item on which ABLE funds are being spent, closely followed by groceries, shopping, gas, discount stores items and phone/cable. True Link found that the top five recipients of ABLE distributions were, in order, Walmart, Amazon, McDonald’s, Walgreens and Uber.

Beneficiaries generally are not using their distributions for housing, which is probably a good thing since housing-related QDE or non-QDE expense distributions are a countable resource if retained by the beneficiary into the month following the month of receipt.  Also, Wall noted that the “big elephant in room is always HUD [the U.S. Department of Housing and Urban Development]. ABLE doesn’t necessarily prevent subsidy reductions.”

What is not a basic living expense?  Dale said it’s hard to come up with an example, although gambling would be one clear candidate.

For SSI recipients, being able to pay for food and other discretionary items with no ISM reduction can translate into a significant windfall for an SSI recipient.  At the same time, being able to spend money without having to obtain a trustee’s permission translates into welcome financial independence for a person with a disability.  “Having the ABLE as a payment facility is a huge win” for both beneficiaries and trust administrators, Dale observed.

However, as Wall noted, allowing unfettered access to funds may not be for every beneficiary. Once funds are out of the trustee’s discretion, they are potentially at risk and could be subject to undue influence and fraud.  The bankruptcy code has been amended to provide a small exclusion for ABLE account funds.

Frigon reviewed some of the tax issues involved with ABLE accounts.  Although a maximum of only $15,000 can be contributed to these accounts, this figure is tied to the annual gift tax exclusion and so will eventually rise.

Frigon said that the tax consequences of using ABLE distributions for non-QDE purchases are “almost nonexistent” because the accounts are earning so little interest.  He said the tax consequences are the same as taking a distribution from an annuity.  There is a penalty of 10 percent of the amount includable in gross income.  In a sample computation provided in the presenters’ PowerPoint, distributions of $10,000 to a beneficiary wo has incurred only $6,000 of QDEs results in a $200 penalty.   (A non-QDE purchase may be a more serious public benefit issue, however.)  Frigon said that while contributions to ABLE accounts qualify for the Saver’s Credit, he considers it “basically useless” because most beneficiaries have no income.

In most states, Medicaid recovery is one of the downsides of ABLE accounts.  The presenters knew of only three states – California, Oregon and Pennsylvania – that have eliminated the Medicaid payback requirement, although they thought a fourth state will soon join the list.

The rules around signature authority to manage the account are another potential danger area. The recent final IRS regulations governing ABLE accounts added representative payees to the list of those with signature authority.  However, if a beneficiary lacks capacity and the parents who are managing the account die, the only way to manage that account is through guardianship or conservatorship.  Also, as the presenters state in their materials, “the ABLE Act and the POMS consider the ABLE beneficiary the owner of the account. If a parent were to establish an account for their child, when the child reaches the age of majority, they can demand to control the account unless the parent can establish their child lacks capacity. It should be noted that there is a difference between having capacity and being able to prudently manage one’s finances.”

Dale knows of no state that allows beneficiary designations, although nothing in the statute forbids them.  Families that want their account to go to someone other than the heirs at law will have to do this through a will or a trust, which probably is impossible if there’s a capacity problem.  “This is a big issue with families and they’re usually kind of shocked,” Dale said.  He noted that in California, one of the states to eliminate the Medicaid payback lien, the account assets may still face estate recovery if it they pass through probate.