Why Are Doctors Failing to Treat People With Special Needs? 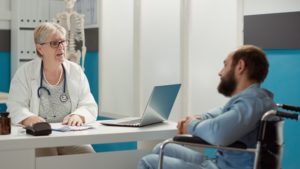 Some doctors are only making these disparities worse, recent research suggests.

A focus group study of 22 primary care physicians from across the country revealed five main themes regarding the challenges these physicians reported in caring for people with disabilities:

While some physicians were aware they could not deny a patient care based on a disability, others “reflected on strategies that would allow them to discharge the patients but minimize risk for lawsuits or other consequences.”

While stressing the need for clinicians and policymakers alike to work on confronting these challenges, the study’s authors also assert that such efforts are still not enough to guarantee that people with disabilities are receiving quality health care.

“Perpetuation of inequitable care for people with disabilities,” they write, “is inconsistent with the mission of medicine and public health.

Amid this research, other scholars have reported findings that people with disabilities have been at far greater risk of dying from COVID-19. For instance, those with intellectual disabilities were six time more likely to die after contracting COVID-19 than other members of the population.

Read more in the research article, titled “‘I Am Not the Doctor for You’: Physicians’ Attitudes About Caring for People With Disabilities.”